Sign In | Register
Back to menu About us
Taoasis introduces itself

For more than 30 years already, as an owner-led family company, we are standing for 100 % naturally pure, high-quality essential oils from organic- or Demeter-certified cultivation. 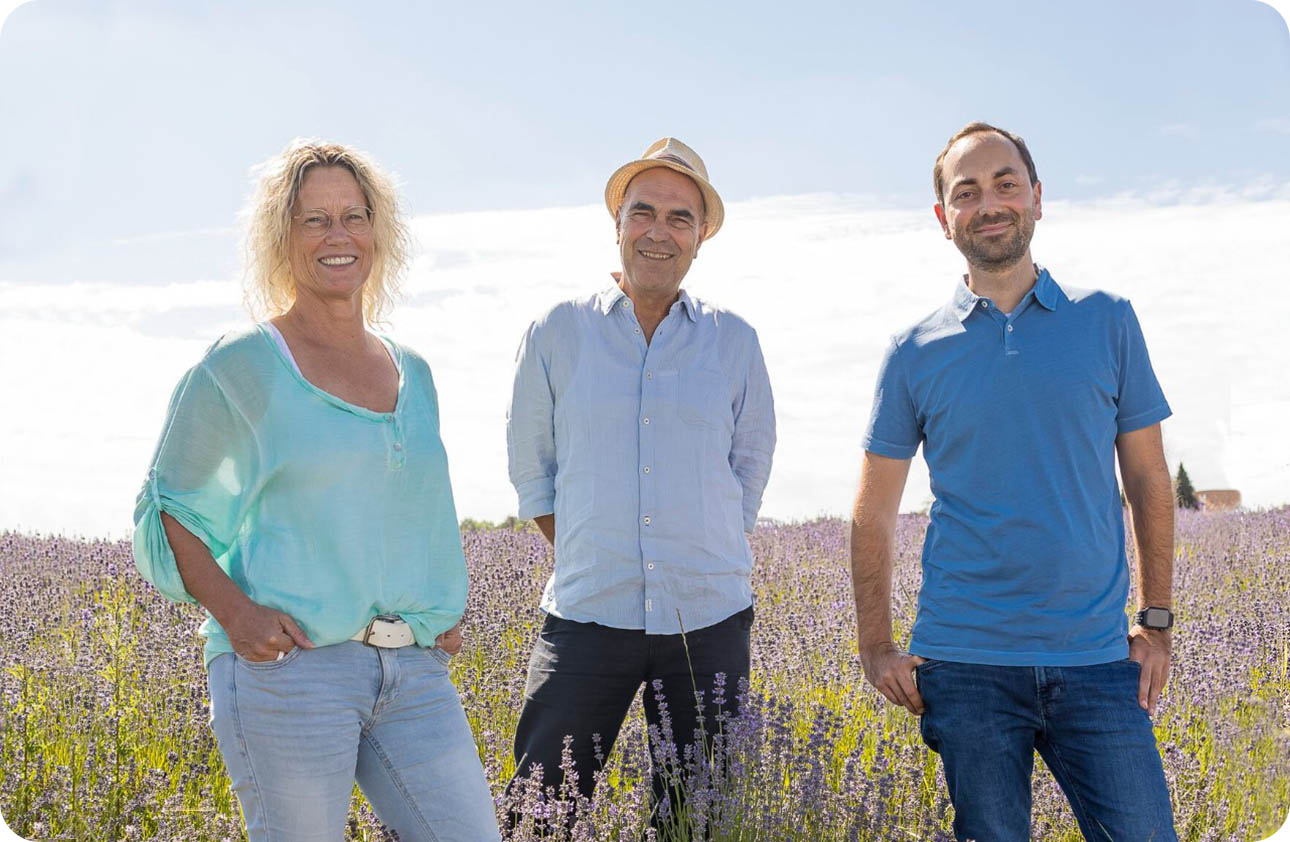 What began with a small assortment of essential oils is now a range of almost 1,000 items. It runs from fairly produced organic orange oil through classic aromatherapy products like lavender and tea tree oil to the first ever Demeter-certified perfume in the world. Our brands include TAOASIS®, Baldini® and Meditao® and can be obtained in pharmacies and specialist organic retailers. 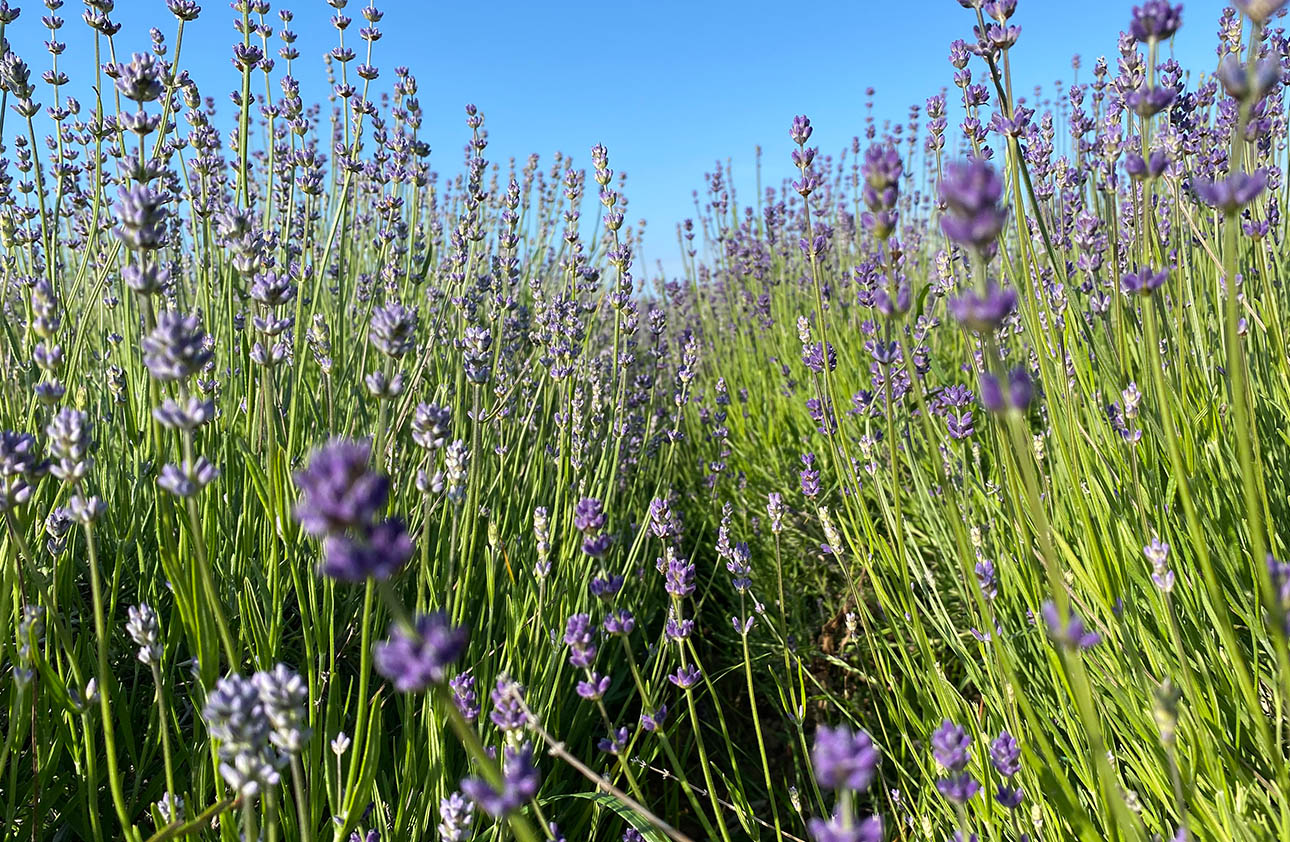 The scent of nature

We make fragrances the way they should be – natural, pure and organic. Nothing goes into our products that doesn’t belong there. That means: no undeclared additives and synthetic ingredients. And because we put harmony between humans, nature and the environment foremost, we always produce our products in a rigorously sustainable, fair and environmentally friendly way. 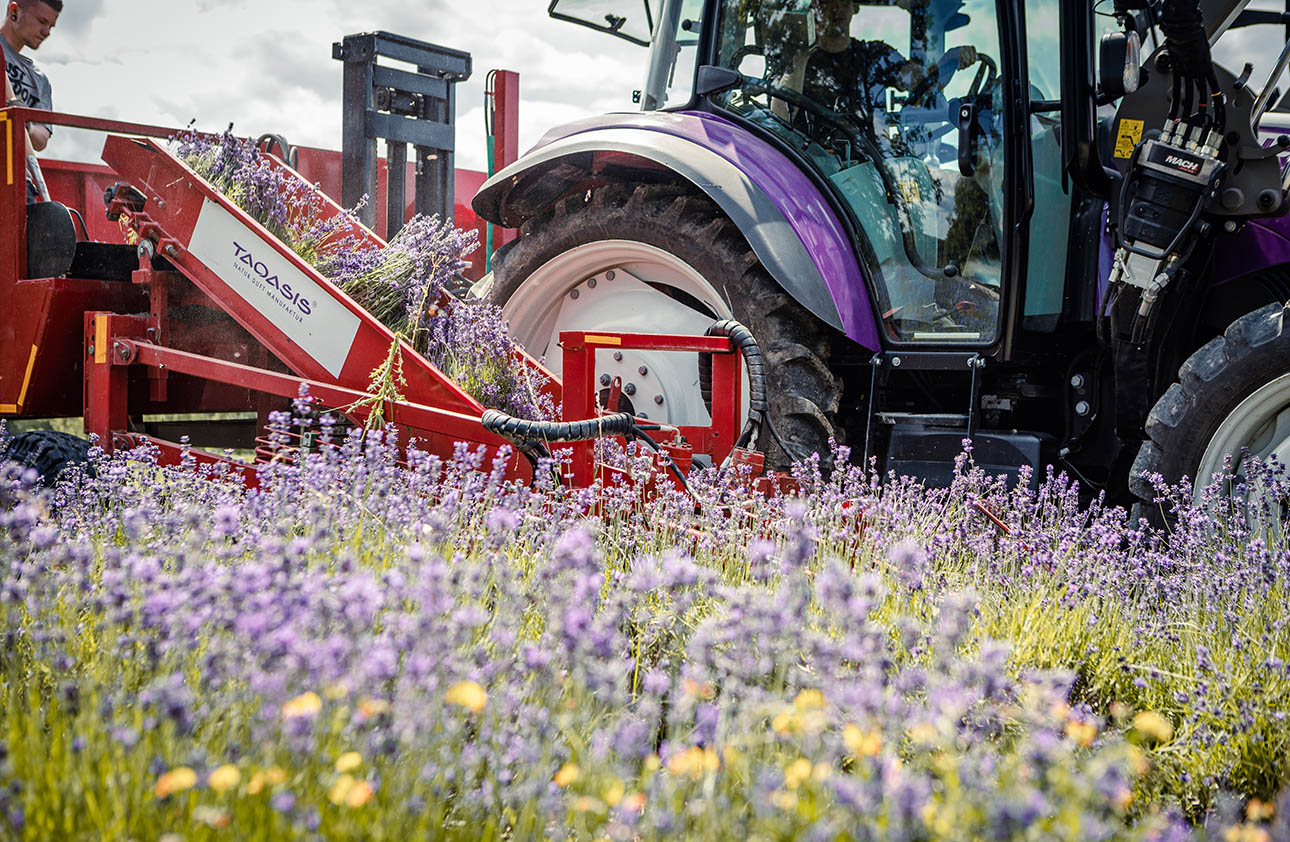 For a diverse region

Alongside outstanding quality, sustainability is a topic dear to our hearts. This is also the reason why, in 2018, we founded the TaoFarm– a demeter-certified agricultural operation where we biodynamically cultivate our own aromatic and medicinal plants, harvest and distil them in our company headquarters in Lage.

THE STORY SO FAR

A trip through the TAOASIS company history 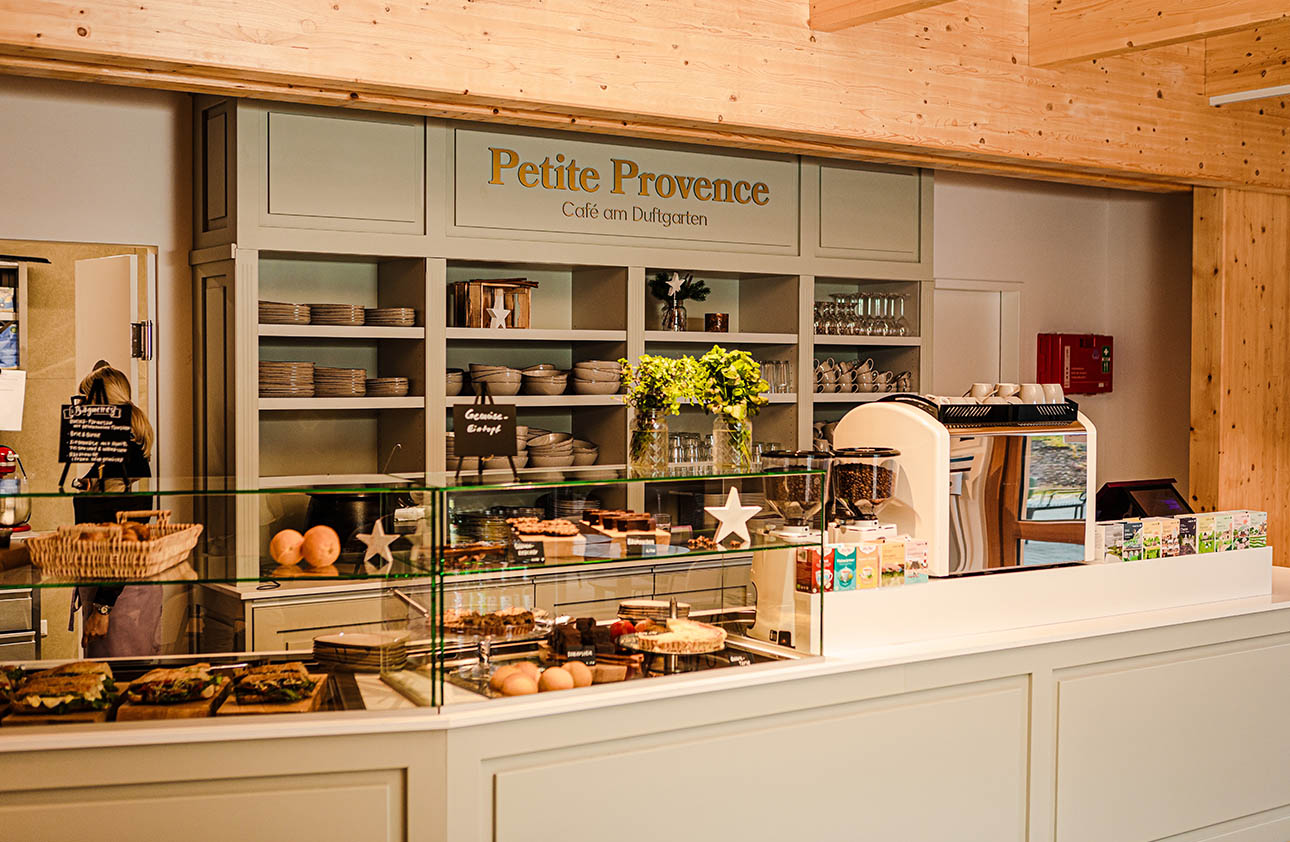 The Café “am Duftgarten” is opened

Salut! Our French Café “Petite Provence” throws open its doors, welcoming guests with food and drink of the best organic quality. From filled baguettes to quiches, there are all kinds of tasty treats to be tried – sometimes even improved with our own organic aromas! 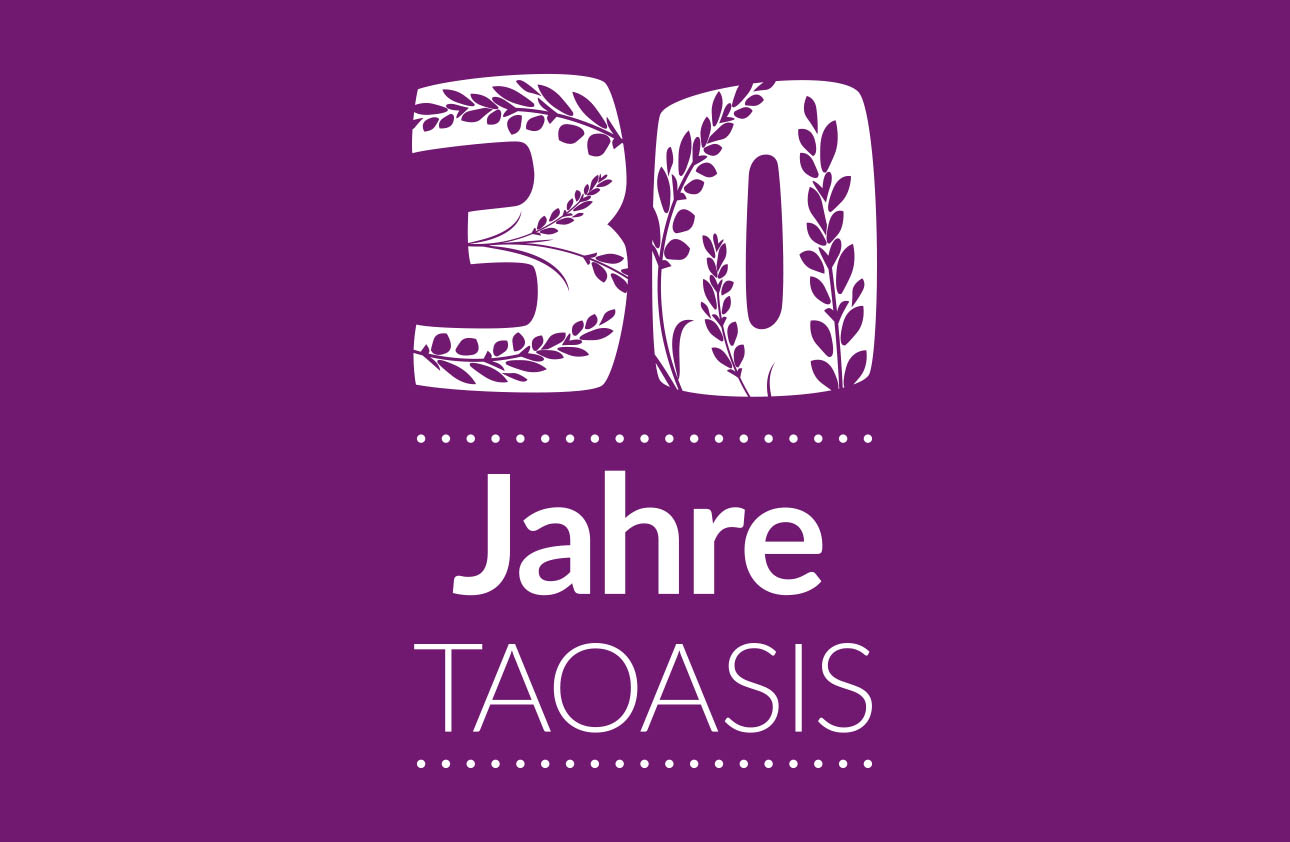 We celebrate our anniversary! For it was almost exactly 30 years before this date that Axel Meyer founded TAOASIS Natur Duft Manufaktur. For the love of nature and above all by conviction: It is possible – even, essential – to produce aromas from purely natural, organically grown ingredients, without the addition of artificial scents. What began with a small assortment of essential oils is now a range of almost 1,000 organic- and Demeter-certified products.

The new year begins for the approximately 60 TAOASIS employees with a very special highlight – they move house to Lage. Here, for around a year, a completely sustainable new company premises has been constructed in wood. A dream, and not just for the TAOASIS team: because the Scent Garden with its neighbouring lavender fields will soon welcome outside visitors who want to relax and unwind. 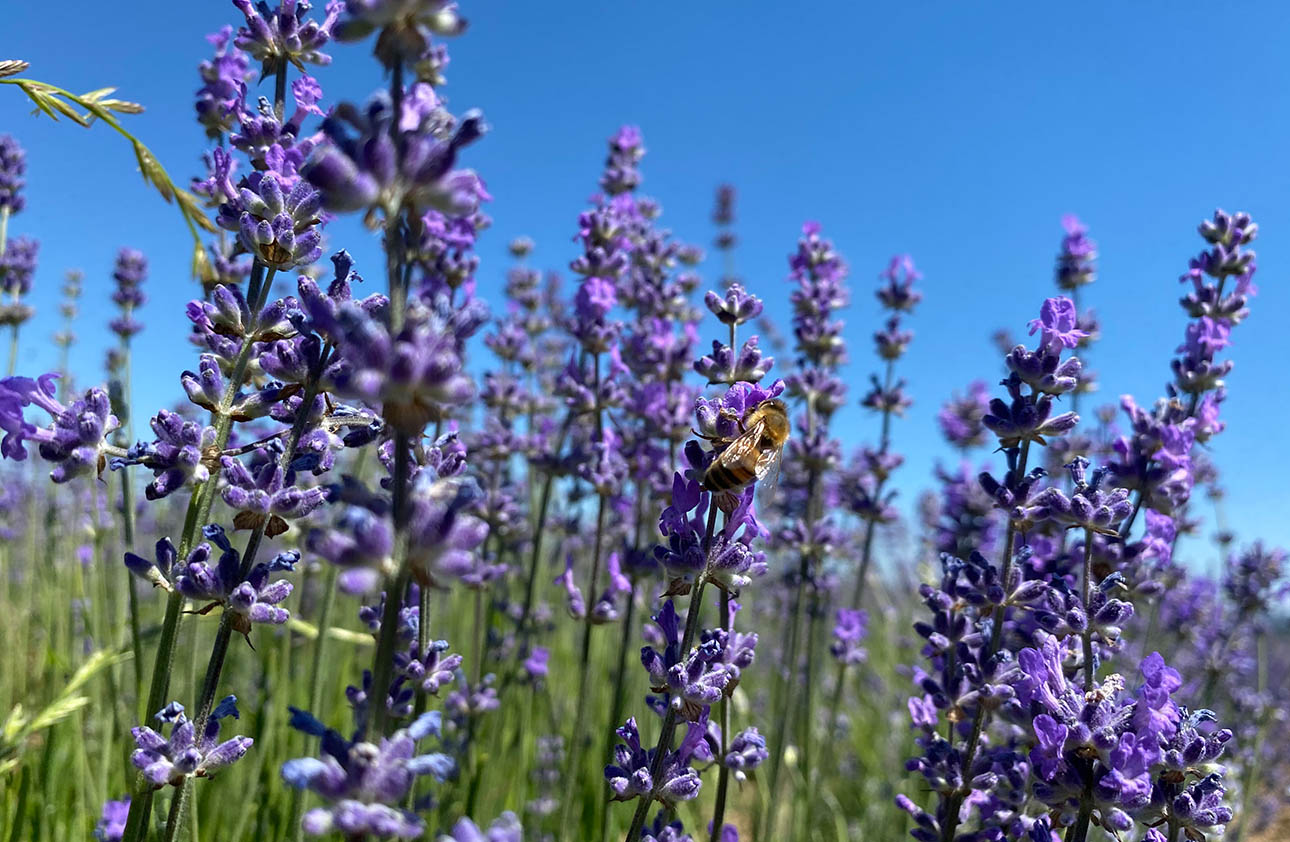 The new year begins for the 60 or so TAOASIS employees with a very special highlight – they move house to Lage. Here, for around a year, a completely sustainable new company premises has been constructed in wood. A dream, and not just for the TAOASIS team: because the Scent Garden with its neighbouring lavender fields will soon welcome outside visitors who want to relax and unwind. 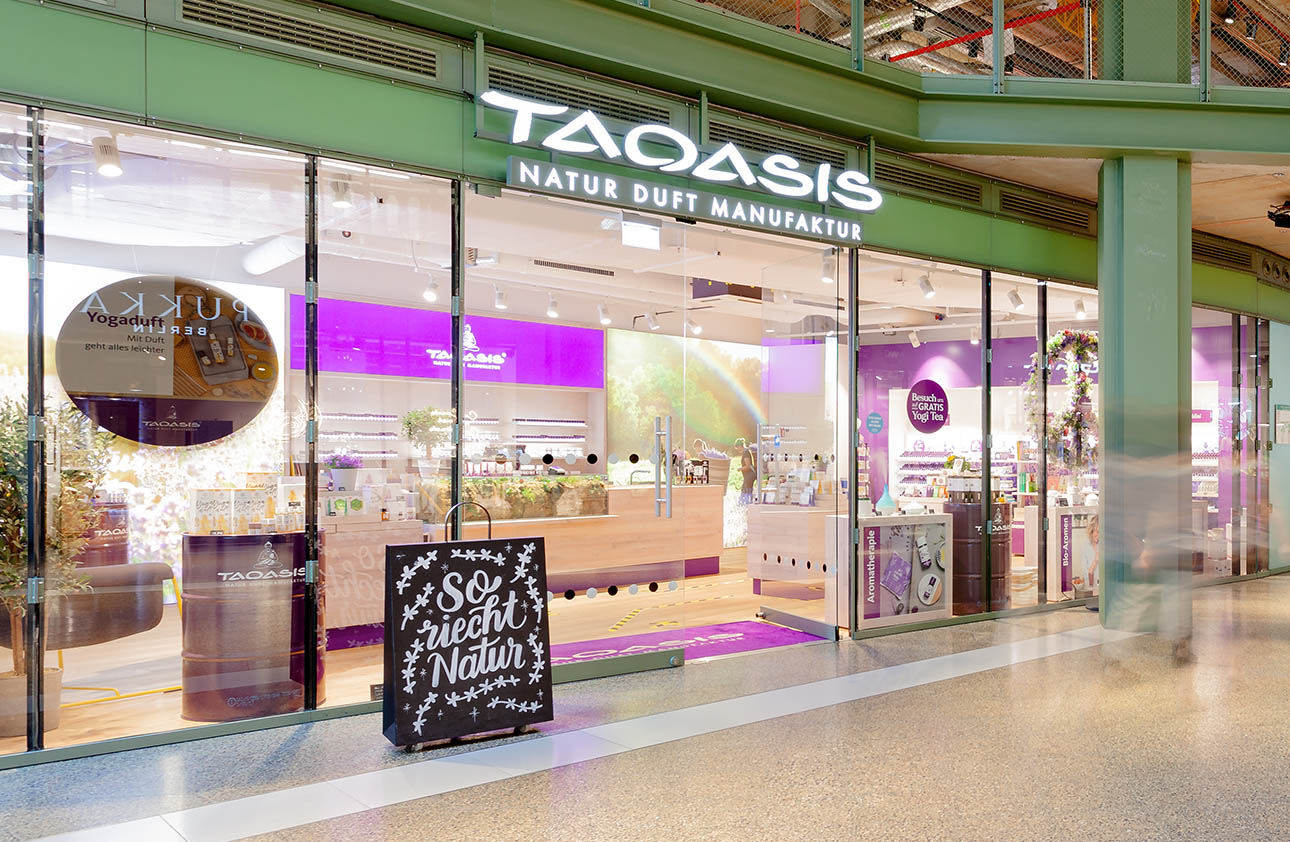 Our own store in the capital

In 2018, TAOASIS returns to the capital. From the town of Detmold, the Natur Duft Manufaktur arrives in Berlin to present a newly designed store of 65m2 containing the entire range of organic and Demeter-certified aromatherapy products, located directly on Breitscheidplatz in the heart of the metropolis. 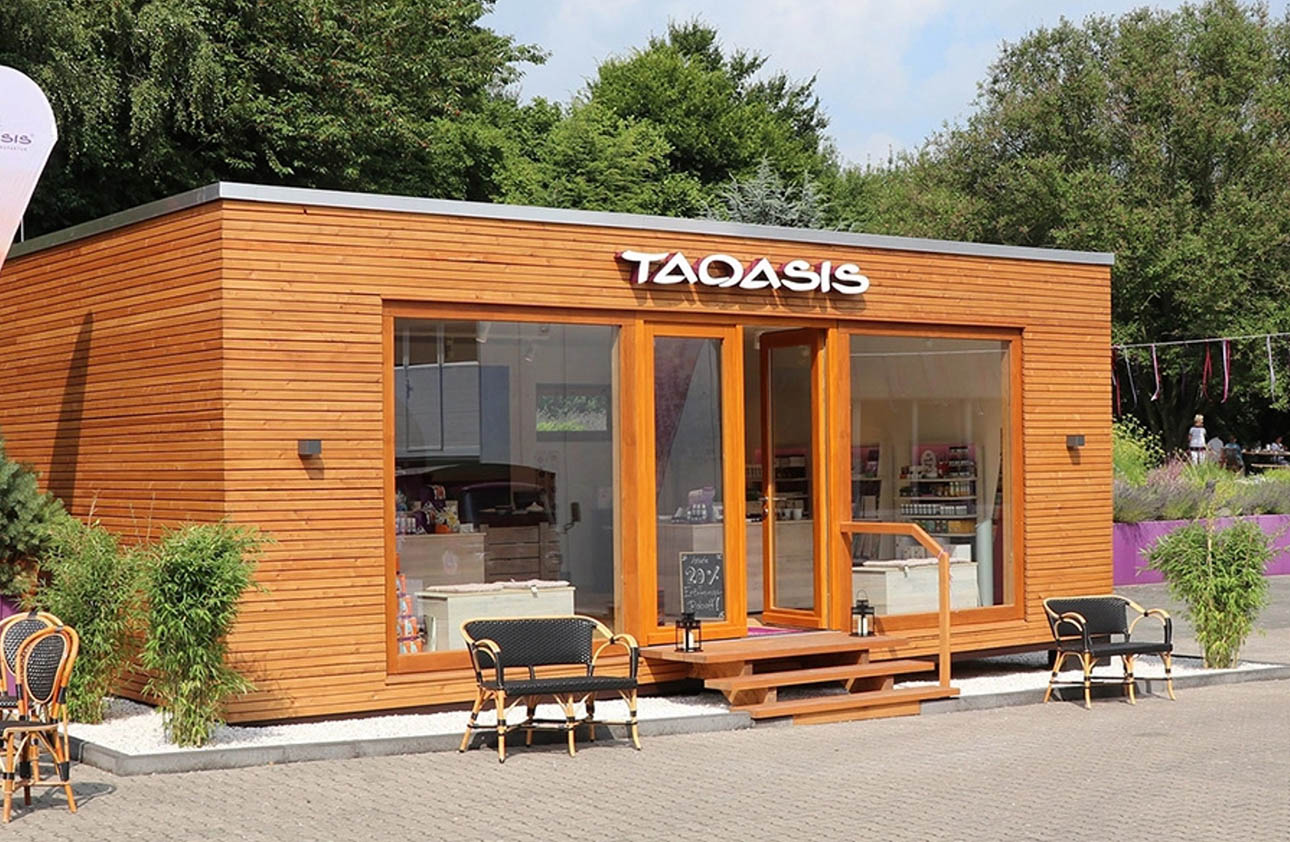 During seminars and tours of the Scent Garden in Detmold, we used to keep having to answer questions about whether the products could be bought on site with a regretful “no”. But from July 2018, no longer! In the new store on the company premises, visitors can now shop to their heart’s content. Here, the entire range of organic and Demeter-certified aromatherapy products from TAOASIS can be found – from essential oils and room fragrances, diffusers and gift sets to natural cosmetics. 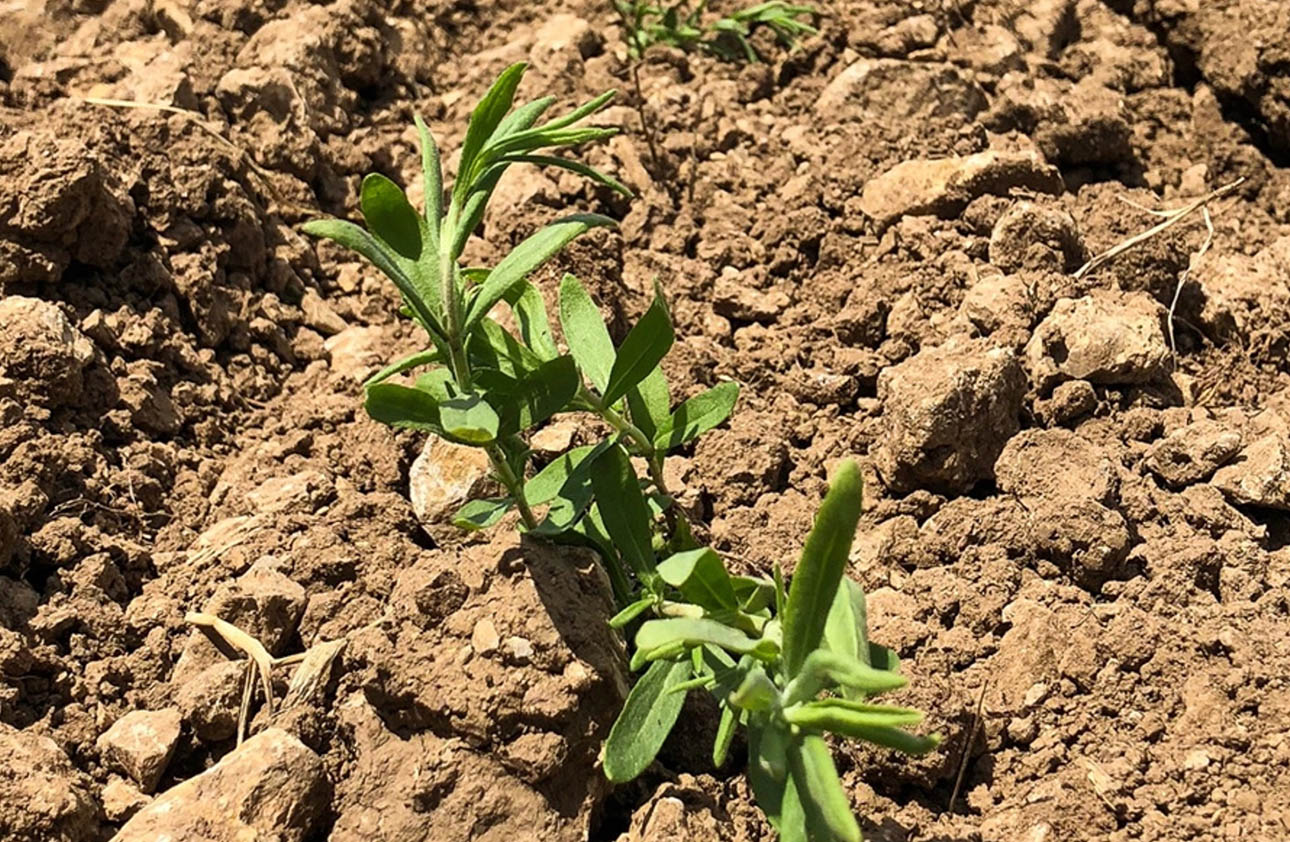 Start of lavender cultivation in Detmold-Fromhausen

Since it’s so easy to grow lavender in your garden – why not think a little bigger? The country village of Fromhausen is just 10 minutes from our headquarters in Detmold. There, two stony fields sloping south-west can be found, an environment similar to that of the Scent Garden on the company premises. In 2015, organic farmer Martin Meiwes plants 50,000 lavender plants there. The first test distillation takes place the following year: And the oil form the Detmold lavender is found to be of outstanding quality. In some aspects, even better than lavender from France. Now at least it is clear: Producing lavender on German soil doesn’t just work – it is also a way to produce healthy, sturdy plants from which high-quality, finely scented lavender oil can be derived. Axel Meyer’s idea marks the birth of Germany’s first organic lavender oil. 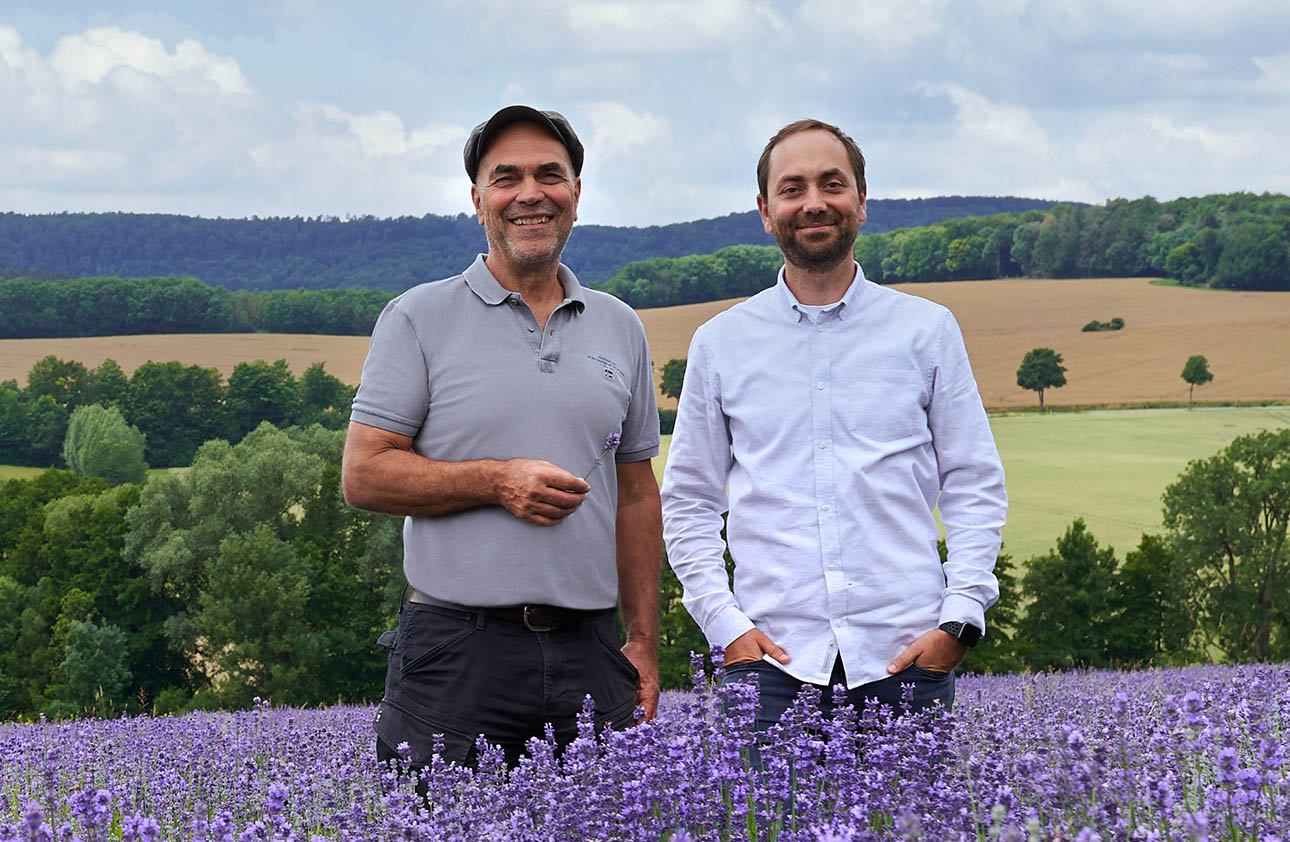 After a few years as head of purchasing and marketing, Govinda Meyer is promoted to become a managing director at TAOASIS. Axel and Govinda Meyer thus share in the running of the family company. 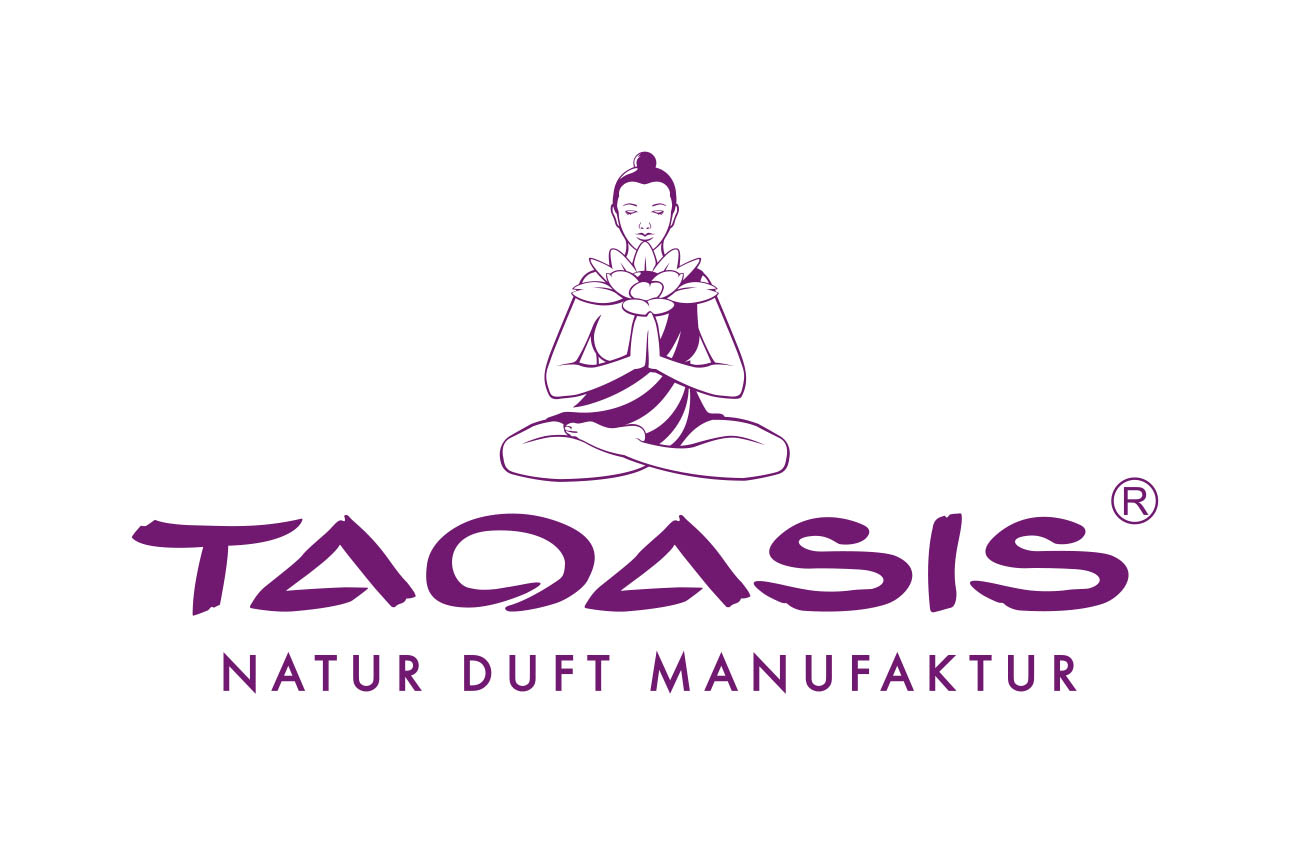 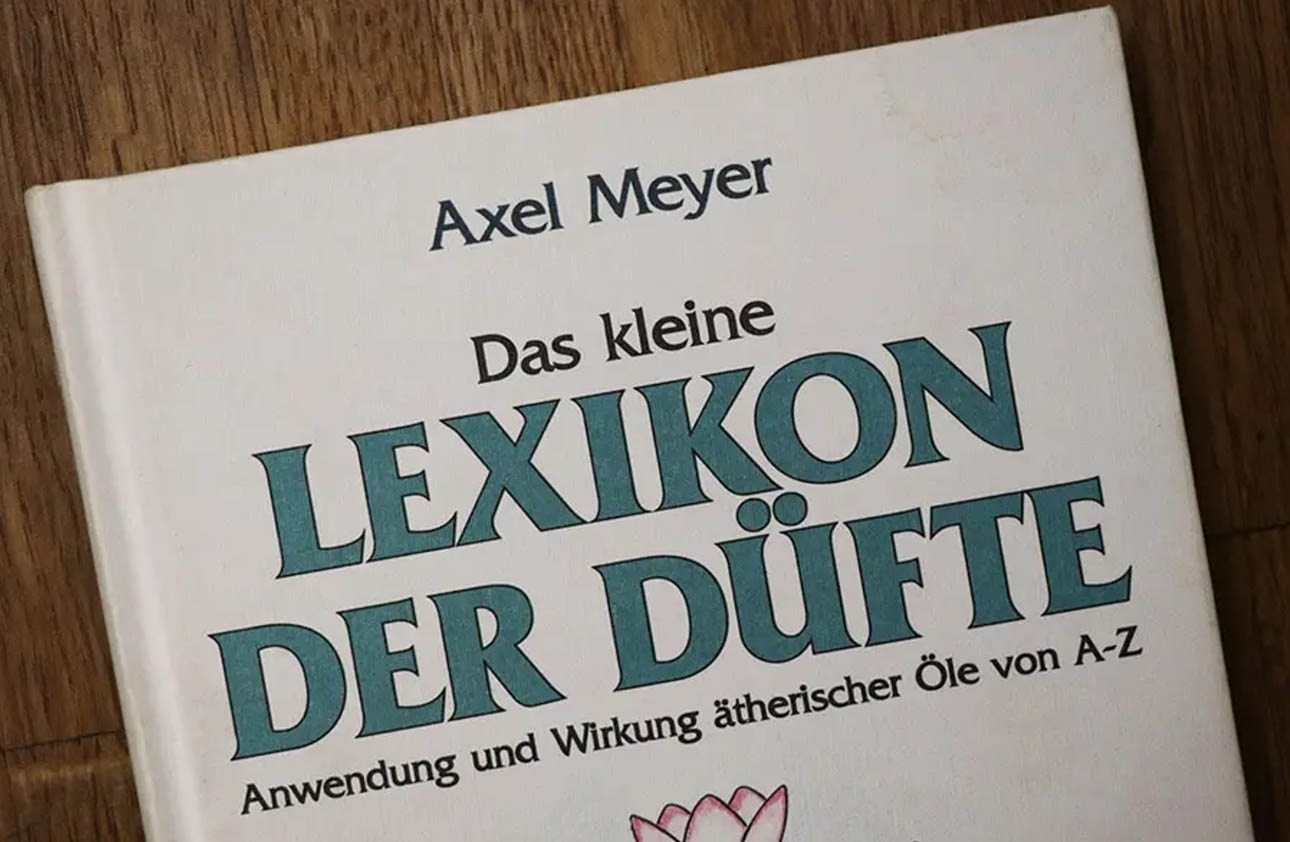 Out of pure enthusiasm and a love of nature and essential oils, Axel Meyer publishes “The Short Lexicon of Scent” to describe a large number of natural aromas and their effects within aromatherapy. The 1st edition of the Lexicon comes out in 1991.

Functional cookies are absolutely necessary for the functionality of the web shop. These cookies assign a unique random ID to your browser so that your unhindered shopping experience can be guaranteed over several page views.

StoreLocator:
Allows Google Maps to be loaded on this page.
Cache handling:
The cookie is used to differentiate the cache for different scenarios and page users.
PayPal:
The cookie is used for payment processing via PayPal.
Information on origin:
The cookie stores the referrer and the first page visited by the user for further use.
Cookie settings:
The cookie is used to store the cookie settings of the site user over several browser sessions.
Doofinder:
The cookie is used to track user interaction with the site search. The data can be used to optimize the search function.
CAPTCHA integration:
Captcha Integration
Session:
The session cookie stores your shopping data over several page views and is therefore essential for your personal shopping experience.
Google Tag Manager debug mode:
Allows to run the Google Tag Manager in debug mode.
CSRF token:
The CSRF token cookie contributes to your security. It strengthens the security of forms against unwanted hacker attacks.
Activated cookies:
Saves which cookies have already been accepted by the user for the first time.
Timezone:
The cookie is used to provide the system with the user's current time zone.

Marketing cookies are used to display advertisements on the website in a targeted and individualized manner across multiple page views and browser sessions.

Google AdSense:
The cookie is used by Google AdSense to promote advertising efficiency on the website.
Facebook Pixel:
The cookie is used by Facebook to display personalized advertising offers based on user behavior to users of websites that integrate Facebook services.
Mailchimp Connected Site:
Ermöglicht eine breitere Datenerfassung für Mailchimp
Google conversion tracking:
The Google Conversion Tracking Cookie is used to track conversions on the website effectively. This information is used by the site operator to target Google AdWords campaigns.

Tracking cookies help the shop operator to collect and evaluate information about the behaviour of users on their website.

Google Analytics
Google Tagmanager
Wishlist:
Cookie zur Speicherung des Merkzettels
Shop Search:
Necessary for the appropriate function of our search solution.
Doofinder:
Randomly-generated MD5 hash, based on User Agent, host, time and random numbers. No fingerprinting used. It does not contain sensitive information nor identifies the user in any way.
This website uses cookies to ensure you get the best experience on our website. You can change your choice of the use of cookies at any time by saving. More information.
- Imprint